Hong Kong Week 10: Is There a Mediator in the House? 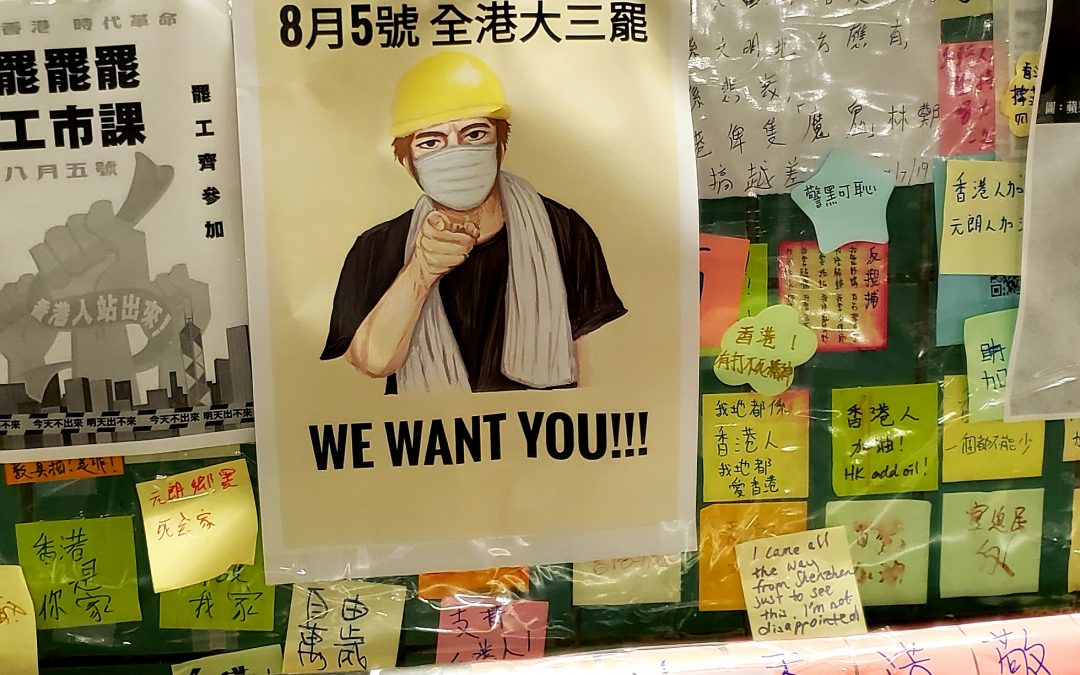 Headed into a 10th week of protests, Hong Kong is a mess right now. What started as peaceful demonstrations has escalated into confrontations between mostly young protesters and police in full riot gear who are shooting tear gas, rubber bullets, and beanbags (the last a projectile that may have cost a medic an eye). Police have been filmed beating protesters. They conveniently showed up late when local thugs attacked retreating protesters with poles.

On the other side, some protesters have been accused of starting fires and hurling petrol bombs at police. It’s hard to know what is happening. Conspiracy theories and disinformation campaigns abound and police have infiltrated the protests to arrest people as well as to escalate confrontations to justify retaliation. All we know for sure is that the more protestors push, the more the government digs in its heels about making concessions. Now frustrated protestors have taken to the airport to bring their grievances to an international audience.

Meanwhile, the big powers have all weighed in. In addition to censoring news coverage in mainland China and instructing the Hong Kong government to stand its ground, Beijing has been meeting on the other side of the border and amassing trucks and personnel. The UK has been critical of Beijing’s encroachment in the former British colony, and the USA has been talking out of both sides of its mouth, with Trump supporting Xi Jinping’s “restraint” while sympathizers urge protection for Hong Kong. No one is listening to the protestors. If the players in this standoff were a family, it would be in dire need of therapy and cross-cultural mediation.

It’s Not What You Said, But How You Said It

If you are my age, you might remember transactional analysis, a psychoanalytical theory that boiled down interpersonal communications to parent, adult, and child positions. As TAA was adopted into popular culture, it became a convenient way to understand anything from family to workplace disputes. For instance, when my boss yells at me like a tyrant, I react like an injured child instead of an adult. Think of any kind of family dispute where it seems like everything said adds fuel to the fire. According to TAA, the only way to bring these kinds of interactions back into orbit is to stop the seesaw and center them, adult to adult.

Now plug in countries or political factions. See where I’m going? Like a parent who unilaterally decides they know what’s best, Hong Kong’s Chief Executive Carrie Lam tried to pass an unpopular extradition bill. When protesters assembled to express their disagreement, instead of listening, she characterized them as disorderly children who needed to be disciplined. A faction of protesters reacted to that discipline, in the form of excessive police force, with counter-violence. A rational response to this kind of conflict would be to deescalate into adult dialogue. Instead, the government continues to add insult to injury by refusing to engage in any way except force.

Next, add in cultural differences. Despite the political upheavals from 1945-1949 and 1966-1976, at its core China is built on communal, Confucian values in which the nation is like a hierarchical family. In a family and a nation, according to this view, harmony is maintained through benevolent leadership and everyone dutifully respecting the order of the whole. If the leader is a strong patriarch (always male in this model), society prospers. If the leader is corrupt, society has the right to a regime change. (Thus, the revolutions that overturned the emperor and the installation of the PRC.)

Views from the west are complicated by western histories. When the UK disputes China’s treatment of its former colony of Hong Kong, it conveniently forgets that being a former colonizer means it maintained a parental stance vis-à-vis its colonies and never treated Hong Kong as a grown-up. The USA, on the other hand, is a society rooted in individualism with citizens willing to fight and even die (or kill others) for personal choices, freedoms, space, property, etc. Nobody has the right to tell US what to do!

My Chinese friends are aghast at how much of the general good many Americans seem willing to sacrifice for their individual comfort or gain. American and European friends are baffled by the amount of surveillance and governmental control Chinese citizens are willing to tolerate for the sake of a “harmonious nation.” Willingness to trust in a parent’s benevolence on the one side of the divide versus rejection of everything from paternalism to good advice on the other.

Hong Kong is stuck in the middle. The protesters are, for the most part, young adults who have grown up in a unique blend of British and Chinese culture. They are Chinese citizens with Hongkongese hearts. If you read the Lennon Walls that have sprouted across the city, they and other locals want to maintain their western-style freedom in a culturally Chinese (and Cantonese) environment. The longer this goes on, the more they are surrounded by bullies and opportunists. No one is even speaking the same language. A cross-cultural expert would have a heyday.

American businesses that work in Asia create handbooks and workshops about the social etiquette of operating in an Asian environment for Americans going abroad. It stands to reason that learning about things like communication styles (indirect vs. direct), eye contact, proper greetings (bowing vs. handshakes), gender relations, and gift-giving customs in a foreign country is a great introduction to customs at home that we might take for granted. (For example, an expat with whom I recently had lunch might not have had a hissy fit about not getting ice in her water if she had bothered to learn that many Asians prefer room temperature water and believe drinking icy drinks in hot weather is bad for your health.)

The concept of “face” is probably the most important lesson of cross-cultural training for Asia. To have face is to possess self-respect and dignity. To give someone face is to grant them honor and respect. To lose face is a catastrophe, whether you are a person, a business, or a country. To cause any of these to lose face in a society that values it above all else is an affront. In a Confucian society, bad children make parents and a family lose face. Unruly citizens make a government lose face, as do insults by other governments. If that government already thinks of itself as a parent, all the worse. Meanwhile, the American face of the moment is an unruly child. When the USA or UK tells China how to run Hong Kong, they provide what China sees as just cause for retaliation.

Meanwhile, Hong Kong is being discounted like a teenager caught in a bitter battle between divorced parents. The CE refuses to budge and the government encourages the police to use brutality and deception. Violence begets violence, and when trust is shattered, bridges get burned.

I’m not a political scientist, a therapist, or a cross-cultural trainer. I have taught students from around the world, lived and traveled in Asia, and I’ve been in an intercultural relationship with a Hong Kong man for twenty years, but I don’t pretend to know the solution to the current standoff. Here is what I do know: bridging cultural (and generational) differences requires listening, engagement, respect, tolerance, self-reflection. I don’t see the government offering any of those things so far. It also requires a safe space, the very thing we all stand to lose in Hong Kong if the sides can’t find common ground and common language.