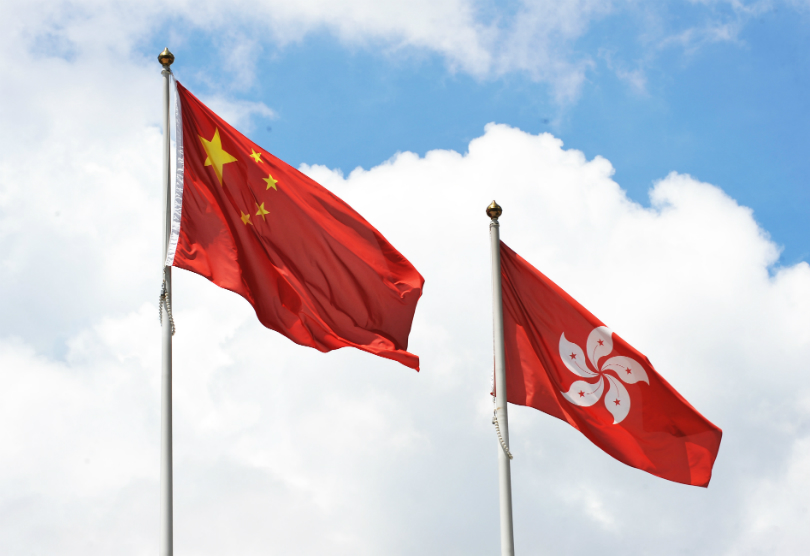 The question we have been asked most by American and European friends since we moved to Hong Kong in 2018 is whether we’ve seen changes since Hong Kong officially became part of China.  I used to shrug and say not really. Some small ripples under the surface, some minor ruffling of feathers here and there. That was before this week.

For the most part Hong Kong has gone about business as usual since the handover, but this week’s demonstrations and violent suppression by police are evidence that frustration and outrage has been building.

We’ve seen obvious signs and symbols of China’s encroachment, like the two red flags flown on all official buildings—one displaying China’s 5 gold stars and the other Hong Kong’s five-petal bauhinia blossom. The mother country flag on top and the Hong Kong flag below. The national anthem of China has become ubiquitous, and national banners now emblazon local festivals. These kinds of changes are easily normalized and dismissed.

Other recent changes have produced mixed feelings. The 2018 opening of a Chinese customs station in Kowloon was accompanied by debates about territorial jurisdiction and premature erasure of the border. The high-speed train linking Hong Kong to Shenzhen and Guangzhou and the new bridge between Hong Kong and Macau have streamlined China travel for Hong Kongers. They also transport increased streams of mainland visitors who clog Hong Kong’s streets and malls.

We’ve heard rumblings about the subjugation of Cantonese to Putonghua (Mandarin) in schools. Grumblings about how some China visitors conduct themselves in public places. These changes have incurred debates about Hong Kong’s unique identity.

Although most post-1997 changes have been taken in stride, the steady shift of Hong Kong’s government toward pro-Beijing policies and perspectives has periodically brought people to the streets. In 2003 half a million people successfully protested a bill that would have allowed political dissidents to be jailed for life. In 2014, students and members of the public occupied parts of Hong Kong for two months to protest proposed changes to the Hong Kong electoral system that would (and did) result in eliminating pro-democracy candidates from the legislature. Nine organizers were subsequently jailed on charges of “conspiracy to commit public nuisance.”

Disturbing as that is, today’s events are shocking. Police in riot gear are swinging batons, lobbing smoke bombs and tear gas, and shooting rubber bullets into crowds of people who are protesting a proposed extradition bill that would allow suspected legal offenders to be extradited to Taiwan and mainland China, places previously excluded from extradition. Critics fear the bill would lead to abuses by China, which has a record of brutally suppressing political dissent.

It’s mostly young people on the streets ignoring the rain and defying police. A few have moved metal barriers and tossed water bottles at police, but the majority are peaceful. They see this moment as a last ditch effort to preserve the free society and democratic process guaranteed under the “one country/two systems” agreement signed when Britain handed Hong Kong back to China in 1997. The government has vowed to clear the streets and Hong Kong executive Carrie Lam says she will press forward with the bill.

Because I am an American in Hong Kong, it is easy for me to take sides and oppose China’s authoritarian one-party rule. But for Chinese citizens, the conflicts are not so simple. Hong Kong is different from China, yet Hong Kong is part of China and will fully revert to China in 2047. Many Hong Kong Chinese have divided loyalties that might seem contradictory—pride in China’s history and accomplishments and commitment to Hong Kong’s political freedoms. To object to Beijing-backed policies is to distrust the mother country—a family defection.

Some protestors have hoisted the British flag in protest of China’s premature erosion of Hong Kong autonomy. Ironic given that British Hong Kong came to be in the wake of the opium wars that humiliated imperial China. During their 156 years of colonial rule, the Brits introduced baked goods, high tea, western education, and a western legal system. Yet for much of Hong Kong’s history, they also treated Chinese as second-class citizens in their own land. Today’s Hong Kongers are evidence that living in a bifurcated country can lead to complicated loyalties and an expanded view. My Cantonese husband (now an American citizen) is an example. He grew up singing God Save the Queen while observing traditional Chinese holidays and practices. He went on study in London and the US and to promote border crossing through educational exchanges between the US and China.

A week ago, I traveled across the border by train to the booming city of Guangzhou, and by plane to Lijiang and then Chengdu. Guangzhou and Chengdu reminded me of why Chinese are proud of China. The scale of Chinese cities is beyond the imagination of many Americans; the populations of Guangzhou and Chengdu each exceed 14 million people, nearly double the population of NYC. Europeans take road trips across the USA and marvel at the expanse of our open spaces. Flying across only a small portion of China, I had that same sense of awe. China is just as vast and with its regional and ethnic minority cultures, equally diverse if not more so (unless we consider the indigenous diversity that existed in the Americas prior to colonialism and Manifest Destiny).

While I am deeply disturbed by the human rights abuses of the Chinese government, I am amazed at how this enormous country with its many cultures and languages and its rugged and varied terrain has been linked by roads and trains, electrical and information highways in a relatively short period of time. Coming from a country whose government spends most of is time deadlocked in factional fighting, I have to grudgingly admit that there is a certain expediency possible with one-party rule.

The anxious questions I have received from American friends in the last couple of days remind me how much the view of China is from closer Hong Kong compared to seeing it from the cultural distance of America.

For several years I assisted my husband in leading groups of American professors to China through the East-West Center in Hawaii. Each year we explored a particular region while interfacing with local universities via China’s ministry of culture. Each year American professors asked the same earnest questions of their Chinese counterparts. They wanted answers on the issues American academics saw as most objectionable: the one child policy, gender preferences and infanticide, suppression of dissent, censorship of the media, retaliation against separatist movements in Xinjiang and Tibet, the status of Taiwan, the destruction of cultural heritage during the Cultural Revolution. When the Chinese professors tried to answer the questions, their answers were rebuffed and dismissed as “party line.” No doubt there was some of that, but ideologically, the Chinese and the Americans were speaking different languages. One based in communalism and the other in individualism. Each side judging the other based on their certainty that they occupied the higher moral ground.

Last week in Chengdu, our Chinese hosts asked equally sticky questions: How can so many Americans be homeless? Why do so many people not have medical care? And their most pressing questions: Why are they making it so hard for us to visit? Why do they now want all our social media passwords and emails before we can get a visa? After my years studying and serving in federally funded programs designed to foster international understanding, I found these questions painful and embarrassing to answer. They live in a country erasing borders while I belong to one that is reinforcing them.

In response to my questions about how Hong Kong people felt about the handover, my husband’s uncle once joked that “Chinese people like to have an emperor.” At the time I recoiled with dismay rooted in my American conviction that democracy is a universal good and goal. That was before the United States elected a president whose role models are authoritarian strong men who view the rule of law as an inconvenient set of obstacles. It seems some of my fellow Americans prefer an emperor as well. My moral high ground is looking neither high nor moral these days.

This week the world is watching Hong Kong struggle with change. If (when) the extradition bill is passed, some will see the outcome as a continuation, some as reclamation, some as an ending. Whatever happens, I want to remember that hope—for Hong Kong, America, China—lives in the spaces where everyday people cross borders to broaden their horizons and create alliances while defying governments that erect or erase them to wield oppressive power.