Memoir Writing: Finding my Way Back Out of the Dark Places 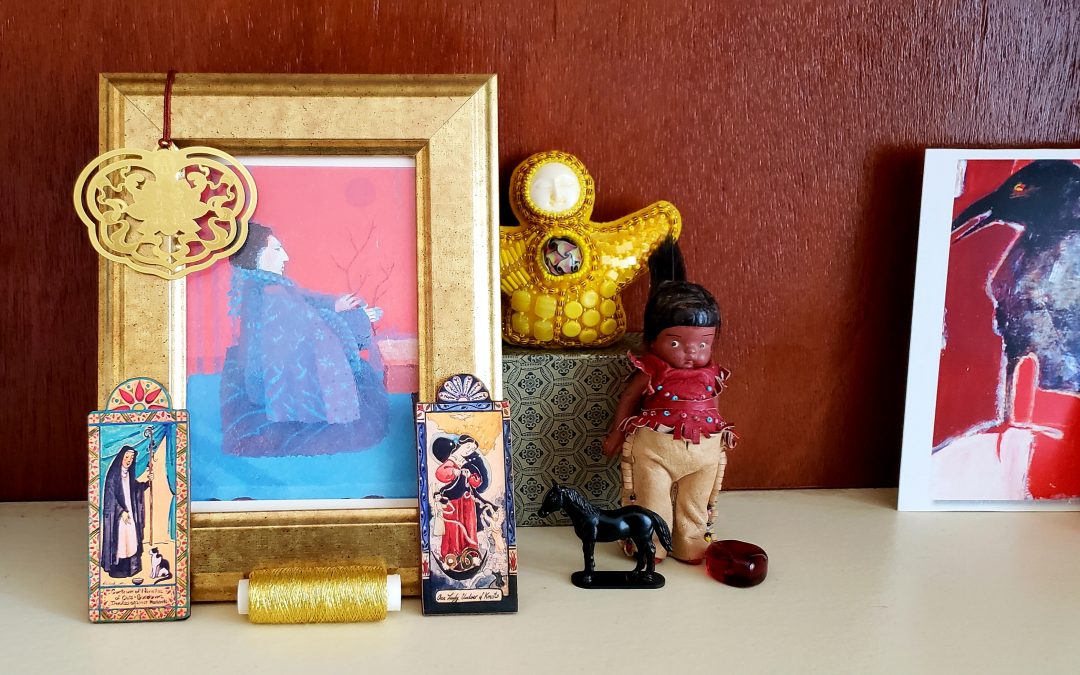 I recently started a memoir about a painful time period when I learned a lot, made some pretty embarrassing choices, and did a few things of which I am not proud. The more I plumb my memories and muck around in that part of my past, the more details bubble up and the harder it is to put a lid on the writing at the end of the day. I could see that I needed a strategy to keep the then from consuming now.

In a recent online conversation with other memoirists I asked how they navigate their daily lives while they are in the process of dipping into painful past memories. Several experienced and accomplished writers responded with interesting suggestions. Some give themselves or the writing a time out by taking a walk. Some said they take extra good care of themselves by eating and sleeping well. Some said they nurture their inner child(ren). I thanked them all for their suggestions but couldn’t help but wonder—what if that inner child is a defiant hooligan or an annoying crybaby? What if the memories slip into your dreams? What if they insert themselves into conversations with your husband, the current one?

One writer suggested finding something from that time period to use as a physical symbol for the past, one that could be put in a box and contained. I am a visual thinker, so I liked this idea. However, having repeatedly wiped my life slates clean and recently moved, I could think of no object that would work. But I did start thinking about symbols and metaphors. I have an interior library full of those to draw on.

A shy and serious pre-teen who preferred cats and books to people, I spent many happy hours immersed in books, and one of my favorite places in the world was the Everett Public Library. The children’s library was in the basement, and on occasional Saturdays, my mother dropped us off for story hours. These were conducted in a half moon by a tall and ungainly woman whose dramatic voice enraptured my imagination and kept me glued to my tiny wooden chair. Her stories gave me chills on Halloween and led me to a particular aisle filled with rows of books that would transform the vague blueprint of my budding consciousness into a cabinet of wonders: Myths and Folktales of the World.

I read Greek and Roman myths. I worked my way through the Grimm Brothers Children’s and Household Tales, Andrew Lang’s Fairy Books of Many Colors, One Thousand and One Nights, Folktales of the World, and East of the Sun, West of the Moon. I read folktales written for young readers and young adult readers, in abridged and unabridged editions. I got a small thrill if I picked up a book with a new cover and discovered from the blank slip inside that I was the first reader to check it out. My favorite book of all was Tal and His Magical Adventures with Noomzornoom, about a magician, a white donkey named Millitinkle, and a boy who was really a prince who went on a journey. Along the way, the threesome told stories.

Decades later, when I had settled down for a time from my own journeys, I would study folklore. (And marry a folklorist, but that is another story.) I learned that fairytales and folktales (the former a sub-genre of the latter) originated in oral traditions and typically contained patterns and pneumonic devices to make it easier for storytellers and listeners to remember them. The number three, for example, as in Three Bears,Three Billy Goats Gruff, and the three tests that so often occur for heroes on quests. That folktales tell satisfying stories goes without saying. Why else would we have so many sappy chick flick movies based on Cinderella (think Pretty Woman)? I learned that folktales are often way more gruesome than the cleaned up versions I had read (Cinderella’s sisters cut off their heels and toes to get into that shoe). I learned that they teach social values and behaviors, often through encoded metaphors (think about girls in the woods and the wolf in Red Riding Hood). This is not always good. Contemporary feminist writers have had a heyday pointing out how Sleeping Beauty and Cinderella stories, despite their variations through cultures and eras, have sneakily enforced a passive good girl status quo on generations of women.

With my early and later obsession with folklore, I am not surprised that whenever I am stuck at an impasse, in life or in writing, myths and fairytales come to mind as my models. Sometimes this is intellectual, such as when I was structuring a memoir about a journey where I made a lot of foolish mistakes that eventually turned out ok, and I considered the structure of folktales about fools who eventually manage to be given princesses or at least come out smelling like roses. Sometimes folktales illuminate a problem, like when I was trying to figure out characterization and theme, and I pictured the Little Match Girl as a reflection of my teen-aged angst or thought of the boy in the Snow Queen who has a piece of ice stuck in his eye that can only be washed away by his sister’s tears when trying to write about my inability to accept the way my parents loved me.

Back to the memoirists and all their good advice. I will admit that my initial reaction to their supportive suggestions about self-care was to doubt and then resent their abilities to climb in and out of rabbit holes. Did they all come to writing equipped with spelunking headlamps? I imagined them toting extension ladders, maps, and rappelling tools while I, venturing out without a plan, had forgotten to bring water or wear a sweater. I wanted to be them, not me.

To me, I wanted to tell them, the past feels like a rabbit hole that leads to a labyrinth (one full of mixed metaphors it would seem). And I am notoriously bad at directions. Except, I managed to recall, I do know something about labyrinths from mythology. As the story goes, when Theseus volunteers to kill the minotaur at the heart of Daedalus’ labyrinth in Athens, Ariadne provides the hero with a ball of red thread to unroll as he walks so he can find his way back out. Her gift is contingent on a promise that he will take her away from Crete and marry her. He does and he doesn’t, but it works out well for her in the end.

A safe way in. A handrail out. Just what I was looking for. I dug through my sewing box and found a spool of gold thread. I placed it on the little altar in my study, in front of the ”maker woman,” as I call the image I keep there—another symbol. I hope it will remind me that as the writer and the subject of my memoir writing, I am both the questing hero and Ariadne with ideas. Maybe I am even the bellowing minotaur, but I might be pushing this all too far with that. The important part I have to remember is that to explore my past, I have to provide my own guideline. With it, I must tie myself to the pillar of the present before I start traipsing around twists and turns in the dark. At the end of the writing day, I have to hand over hand reel myself back to my present self. And once I have tamed the minotaur? I can get myself out of Crete and back to where I belong. Here. Now. In charge of my story.