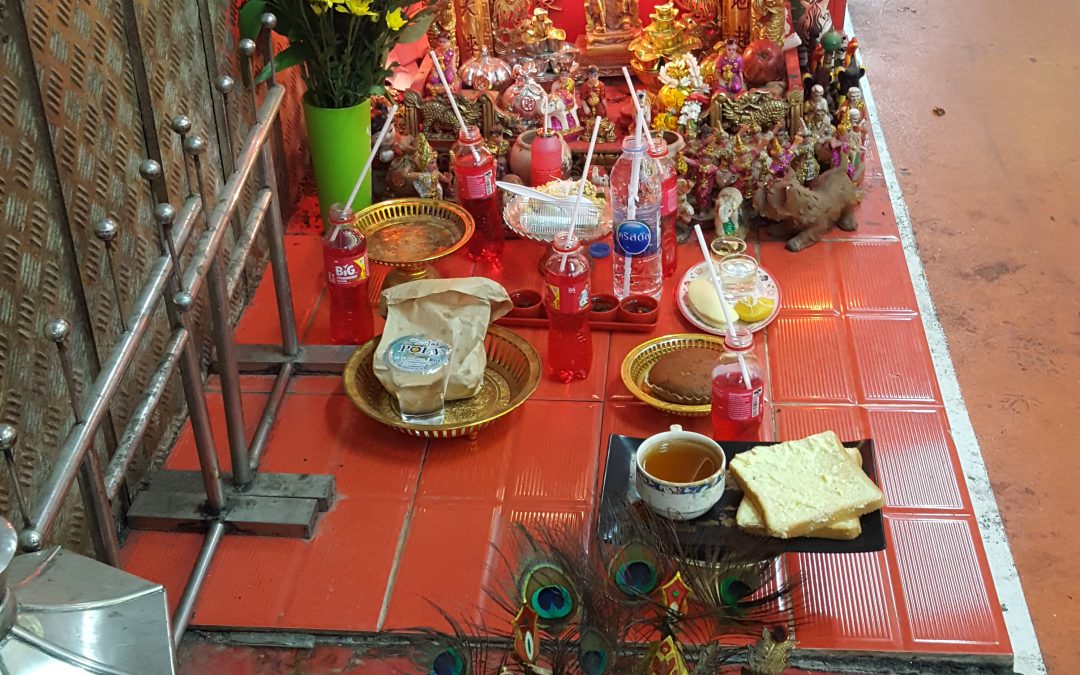 Last week we were in Bangkok, a city dotted with shrines. Elaborate, temple-shaped shrines to the Buddha, the new king, and the queen mother appear alongside traffic-clogged roads, in front of hospitals, inside and outside of upscale shopping malls. Confectionary white and gilded, they look like pillared dollhouses with their arched windows and tiered, domed, and many-peaked roofs. Inside some structures are ceramic figures of unicorns and tigers, court dancers and attendants. The mini-temples are surrounded by herds of zebras and flanked by elephants and roosters—creatures that symbolize safety and strength.

Wooden spirit houses—like oversized birdhouses for glamorous birds—perch atop poles outside shops and restaurants. Their

high peaked roofs and fenced porticos mirror the shape of traditional village temples and make a space for spiritual guardians. A little like having a live-in property manager for your home or business’s well-being.

A shrine on its own is only a statement of intention. The long flower garlands, artificial and real, draping portraits of the king and queen mother express commemoration and affection. Spiritual energy, on the other hand, must be animated through human exchange. Devotees and supplicants make offerings to wake the gods. They loop tasseled ropes of yellow marigolds over the posts and fences of the Buddhist shrines and spirit houses. They set out small bowls of water and food on the platforms. The gods must be fed and delighted, respected and thanked.

An altar in a church or temple is where the holy business takes place. It is a liminal space that marks the doorway between the human and spiritual worlds, where God or the gods are invoked, entreated, praised, worshipped. A shrine that is a space of regular prayer and offerings is also a form of altar. It can be very small. Inside the small enclosure where we boarded a boat to go upriver, I spotted a wooden crocodile with a circlet of white and yellow flowers on his back as a river offering. An aperture the size of a mouse hole is still an invitation to luminosity.

I read an article saying the number of Thai people going to temples is in decline and that in this formerly very Buddhist country, people now worship money and have no time for spiritual pursuits. The article did not take into account that the awe-inspiring temples are congested with milling, noisy, selfie-taking tourists. Nor did it consider that perhaps the temple and the marketplace are not so far apart. What do people pray for? Safety, love, security, health, prosperity. We seek intervention. We desire mystery. We want support.

In a covered market in Bangkok, we came across a Chinese earth god shrine outside a row of small shops. Along with the standard offerings of incense and flowers were peacock feathers, opened soda bottles with straws, and some plates of food, including two pieces of buttered bread and a cup of tea. It reminded me of the many earth god shrines I have seen in Hong Kong and on Cheung Chau. Each day in these spaces someone reaches across the boundary between the seen and unseen by lighting a stick of incense, arranging a pile of oranges, refilling a bowl of water or oil. We need so much help to be human.