Travel Re-Entry and the Seige of CUHK 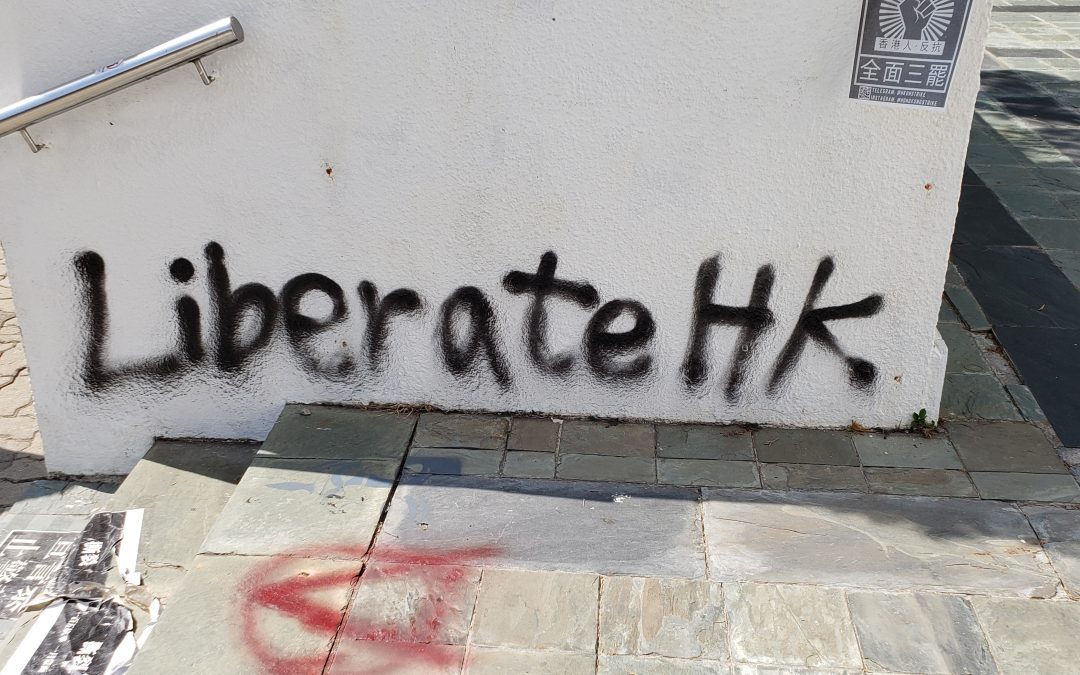 Returning home from international traveling, I often wish for an airlock between coming and going. I envision a decompression chamber that looks something like the double sets of doors on fancy hotels. There would be a comfy sofa for the in-between, no transit rush, and monitors to make sure I was good and ready for re-entry. It’s my life waiting on the other side, but it’s on a moving track. Between jetlag and culture gaps, acclimation often takes me a week. Returning to Hong Kong from my recent travels, I felt like I’d transited more than time zones. It’s taken me this long to get a grip.

Re-entry happens at many levels. When we lived in Hawaii, I inhaled the scent of plumeria on returning and thought how lucky I was to live in the islands. Coming home to Hong Kong’s pollution, traffic, and density after 6 weeks in the US was like being shoved onto a hurtling treadmill. My hard won cultural adaptation peeled away and Hong Kong was once again too loud, too bright, too polluted, too crowded, too fast, too crazy for my introverted, American sensibilities.  I had to catch up to rocket speed.

Re-entry applies to marriage as well as country and culture. Fred and I have been coming and going for the entire twenty years we’ve known each other, and we’re pretty good at it. Not that we don’t travel together, we love to, but just as often, one of us travels and the other holds down the fort. There are cats to consider, and we lost our wonderful cat-sitters when we left Hawaii. He has a job and work obligations, so it is usually me staying home.

When it was my turn, I planned an extended trip to see family and friends in Texas and Arkansas. My journey took me down winding country roads and through deep conversations and layers of memory. Along the way, I remembered how much I love to drive and keep my own hours, how much I love Rueben sandwiches, un-crowded coffee shops and sidewalks, Fall weather, the wide aisles and selection in American grocery stores, talking with old friends, greetings from porch-sitters, southern hospitality, seeing the stars, laughing with my daughter, good Mexican food.

One of the ways we navigate our times apart is by sharing tales when we return. As I stored up my inner and outer experiences to share with Fred, I looked forward to the kind of conversations I’d been savoring with old and new friends. Instead, we were out of synch.

Reconnecting is easier when one person waits for the other to return. Fred was gone to a conference in Hawaii when I arrived. I—the introverted half of this partnership—had been steeping in a combination of reflective solitude and one-on-one encounters for 6 weeks. Mr. Extrovert had been party hopping from one reunion gathering to the next. He came home wired on group energy, and my spindly narratives had to wait for his exuberance to subside. I was missing slow and quiet and belonging while he was recounting potlucks and lobster dinners. We could both have used a monitored time-out in the airlock.

Successful re-entry after time apart requires time together. Just as I was getting over my What am I doing in Asia? blues, Fred left again. He was off for a conference in Taiwan right when Hong Kong’s months of weekend protests flared to new intensity.

During my entire trip I fielded questions about the protests in Hong Kong. I did my best to dispel the fears of my family and friends. I assured them we were not in the conflict zones and that the media was showing the actions of a radical few. I told them to worry about the future of Hong Kong but not about us.

When you can’t leave, you batten down. The night before Fred left for Taiwan, protestors barricaded the entrances of the CUHK campus where we live. We assumed the confrontation wouldn’t last long. Early the next morning, Fred hiked to an exit and got a ride to the airport with his grad student. I nervously watched televised news coverage of a standoff between police and protesters on the other side of campus. In Cantonese. I recognized various locations on the live feeds, but couldn’t understand the commentators. I watched protesters hurl petrol bombs and police fire round after round of tear gas. The No. 2 bridge, where we regularly walk from campus to Science Park, had become a war zone.

No information breeds misinformation. That night and the following two days, I was deluged with text messages from family and friends checking up on me. I was grateful for their concern. Several offered to help me get out despite the blocked entrances. All I had to do was hike out. I explained over and over that with no car and buses, I had no way of transporting 2 cats in carriers from our residence to a break in the barriers. And where was I going to go with cats? One kind FB friend offered to take them, but she lived miles away.

Over the next forty-eight hours, the information gap welled up with partial information and rumors. The police were going to invade the campus. The campus had been taken over by paramilitary outsiders. The protesters had hidden explosives everywhere. The PLA was coming. The government was after the CUHK server so they could control the internet. A complete evacuation was being ordered. The bridge had been blown up. The air was unfit to breathe. I should sleep with a wet towel near my bed in case of fire.

Rumors may or may not contain a grain of truth. Trying to stay calm, I remembered what I knew from teaching a unit on rumor in a folklore course, that they speak to social anxieties and fears. Some of these reports would turn out to be partly true and others unfounded.

I watched my neighbors, none of whom I know, pack up their cars and leave. I guessed they were driving to the barricades and walking out. Relying on secondhand information and trying to decode the rumor mill, I felt more foreign and helpless than I have in a long time. Finally, solid information started to trickle in. My brother-in-law called to say a letter urging evacuation had been posted on the CUHK website. In Chinese. Fred called to say he was coming home a day early. My sister-in-law in New York called to tell me the Chinese language news said the protesters had left during the night. I was glad I had stayed put.

Crisis changes perspective. In the days that followed, we surveyed the damages on campus: graffiti and burned vehicles, catapults and torn up sidewalks, piles of discarded umbrellas, cans of flammables, shattered windows, mountains of donated clothes and instant noodles. Our relief at being back together spilled into mutual sadness at seeing our beautiful campus vandalized.

I marveled at how in the space of a week my resistance to coming home had, under duress, turned into resistance to leaving. It’s hard not to love this vibrant city where people are fighting for the right to remain a geographical and ideological transit zone.