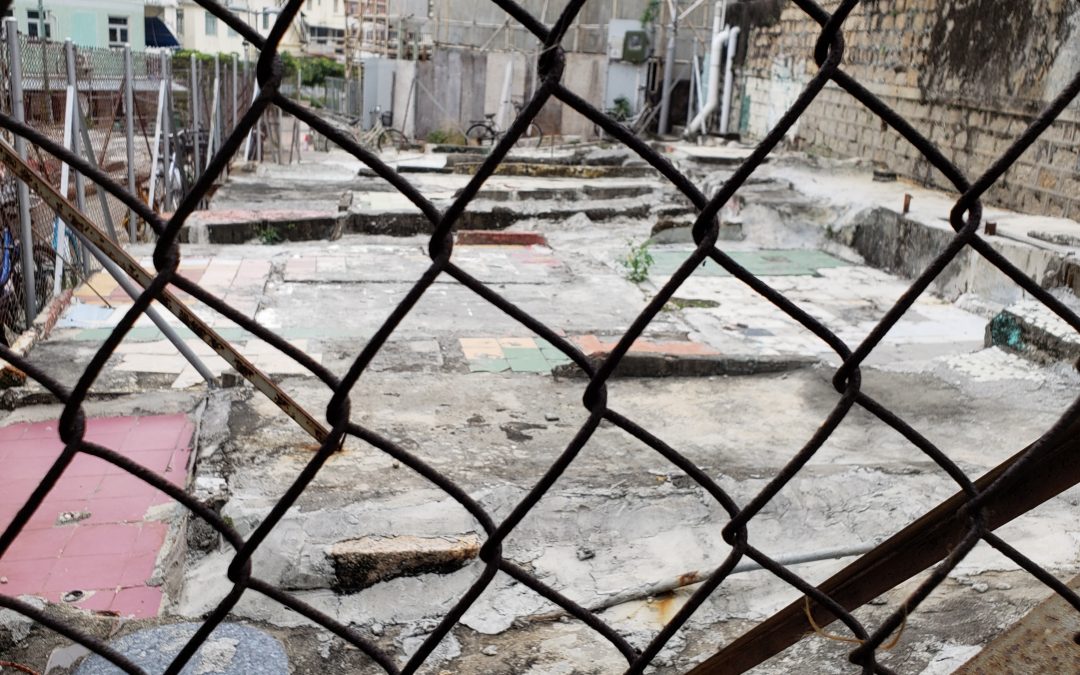 In the process of writing my memoir, I have discovered that my memory is a funhouse full of trap-doors, hidden passageways, wavy mirrors, and locked doors. For example, last night I went out to dinner with three women I met during my husband’s sabbatical year in Hong Kong ten years ago, the period central to my just completed memoir. When I asked one of the women where she lived, she looked at me strangely and said it was the same place in Discovery Bay that I had visited last time. No doubt my blank expression was a dead giveaway that I had zero memory of that visit. According to her account, later verified by my husband, on that visit we met her son and admired the view from her rooftop, stopped in at the flat of a colleague, showed off our substandard sublet, and went out to eat in a western restaurant near the pier. Her son, who was six at the time, still remembers that my husband ordered and devoured an enormous hamburger that arrived at the table impaled on a large knife. I, on the other hand, have only one clear memory of that evening (I am taking their word that these events all happened on the same evening). I recall the colleague telling us that he had painted his dining room fourteen times to get it the right shade of green. Why did my brain select that one detail as important? Did it store or discard the rest? And what does that say about the selective and relative truth of my remembering?

From our Discovery Bay sublet, back in 2008, we had a nightly view of the fireworks over the Fantasyland Castle in Hong Kong Disneyland. In trying to fit together fact with my memory, it seems fitting that another of my selective memories is of watching a film called Donald Duck in Mathimagic Land in grade school. If you watch this short film on YouTube, you will see it is a clever introduction to basic math concepts like the Pythagorean Theorem and the Golden Mean. Friends and former students exposed to my sorry math skills would not be surprised to hear that what I remember from this film is not the math formulas. Instead, I remember a brief sequence showing the interior of Donald’s mind as an exploded archive. The narrator says his mind is full of “antiquated ideas, bungling, false concepts, superstitions, confusion” and that to “think straight, [he will] have to clean house.” Then a handy cartoon broom tidies up the mess, sweeping papers off the floor and into file cabinets. I envision my memory much like Donald’s pre-broom disarray.

Although writing memoir requires considerable cleaning up to think straight, it is not so easily done. There is no governing theorem. No standard filing system. How do you sort out a life? By events? Topics? Traumas? Sites? From the edges to the center or the middle out? Memoirists often rely on chronology, but even that is a sticky template because our present minds resist timelines by racing forward and back, trying to see around the corners to the future, worrying over the past like a sore tooth.

If we settle on chronology as a way to tell our stories, there is still the question of where to begin. I am somewhere past the middle of my life with six decades of experiences and their attendant memories to sift through. I have moved four times, remarried twice, gone back to school, had multiple jobs, made a lot of wrong turns, started over and over. Although I imagine a map of my life would look more like a tangled granny knot than a straight line, the narrator of Mathimagic Land insists, as the Golden Section proportions settle over the spiral of a chambered nautilus, that “all nature’s works have a mathematical logic.” The key to locating a storyline for my memoir lay in choosing a segment of the spiral, and for me, that meant starting with the outside, the most recent. I chose to write my first memoir about the recent past for several reasons. It was the most visible and accessible phase of my life. There were living witnesses to help me out when my memory turned up blank. For the most part, I can still visit the settings to fill in details. Beyond those considerations, the recent past felt safer and closer to the light than the distant past. In Greek mythology, Theseus needed a thread to get through the maze and escape the minotaur. By setting out to write a memoir, I was both spinning my own thread and venturing into my own maze. On this first trip in, I wanted to find my way out.

Although I tried to play it safe, beginning where I was led me deeper into where I have been. At first, I was only planning to write about the year we spent in Hong Kong, my mostly entertaining story of overcoming culture shock. The more I wrote about that, the more I found that I needed to explain the relationship and events that led to us being there, in Hong Kong, together. And the more I wrote about my initial culture shock, the more the story deepened into being about my learning to appreciate Chinese culture and my Chinese family. Writing about that internal shift also led to exploring how I returned to my American life with a desire to change my own family relationships. What I had thought was the whole story grew a before and an after, its wings.

Writing a memoir has taught me a great deal about truth. As the conversation with my friends demonstrated, even recent memory can be full of holes. There are frustrating gaps, like my blanking out the visit to our friend’s flat. There are dangerous potholes where I get stuck in some dank mental cellar until I can muster up the energy to climb back out. And every so often, I step on a rotten floorboard that plummets me into hidden rooms and passageways. Sometimes this happens when I have written a sentence, paragraph or chapter that doesn’t sit right, and I ask myself if what I have written is true. Not fact true, but feeling true. Do I really know why I or someone else did or said something? Do I really know what that means? If I can honestly admit that I don’t know, I drop down into another layer of knowing or not knowing, it doesn’t matter which as long as I am willing to explore. Along the way, I might get lucky and discover a key to a locked file cabinet or door.

As creative writing instructors are fond of saying, memoir is not autobiography. Rather than being a sequential accounting of a life, memoir is memory extracted, refined, crafted, and refracted into storytelling that strives to touch on universal human experience. It works the way memory does—by association instead of logic—proffering a funhouse kind of truth best understood by the heart. I’ve just started sending my memoir out into the world of agents and publishers. My hope is that my version of the truth will resonate for others.